Adventure Time with Finn and Jake 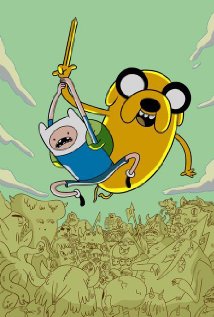 Not recommended under 8, PG to 12 due to violence and disturbing scenes

Adventure Time with Finn and Jake centres on the surreal adventures of a 14-year-old human boy named Finn (Jeremy Shada) and his wisecracking dog Jake (John Di Maggio). The film is comprised of five episodes of the hit animated television series, following the two best friends as they explore the post-apocalyptic land of Ooo. Whether it’s surviving the hellish dimension of the Nightosphere, or gathering friends to try and conquer an Ice King, the Finn and Jake try their best to have fun and ultimately save the day.

Adventure Time with Finn and Jake is a fun, action-packed story about friendship, having fun and doing the right thing. Although Finn and Jake often take the wrong path in their quests to investigate new places and help the people they care about, they ultimately have honourable intentions. As a result, it provides audiences with an escapist avenue for exploring new, dystopic worlds through the eyes of a young boy and his pet dog. Parents of younger viewers should note that the film contains animated violence and gore. It is therefore not recommended for under 8s and some older children may need help with some scenes.