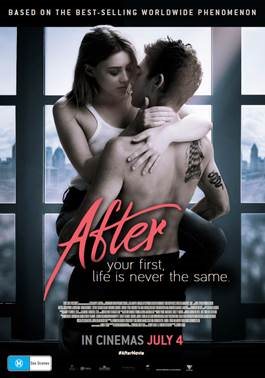 Not suitable under 15; parental guidance to 18 (sex scenes, themes and potentially harmful messages)

Tessa (Josephine Langford) has always been the perfect daughter, following the plan that her mother, Carol (Selma Blair), has laid out for her life. Tessa is kind and studious, steadily dating Noah (Dylan Arnold), the same boy she has known since she was five; she is well grounded, responsible and trustworthy. It is this trust in her daughter that allows Carol to leave Tessa in a College dorm room that reeks of marijuana with her heavily pierced and tattooed, openly lesbian, partying roommate Steph (Khadijha Red Thunder). Tessa, the innocent and sensible, appears to be the embodiment of everything that Hardin Scott (Hero Fiennes Tiffin) is not. When the two first meet it is anything but love at first sight. In fact Hardin does not believe in love at all and after Tessa refuses to kiss him as part of a wild, party game he vows to his friends that he will make her fall in love with him and once she is under his spell he will simply turn off the emotion. Despite the fact that he doesn’t always treat her very well Tessa succumbs to her attraction for him and they begin spending more and more time together. It is only after Tessa and Hardin make love that Tessa discovers the truth behind the origins of their relationship and Hardin realizes that true love does exist, that he had it with Tessa all along and that he may have lost it forever.

After is a romantic drama based on the book series by Anna Todd. The main actors give heartfelt performances and the film will most likely appeal to female teen audiences.