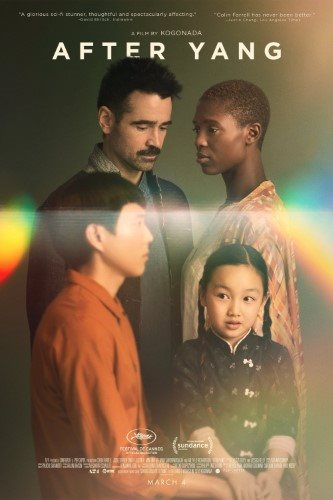 Not suitable under 10; parental guidance to 12 (themes and coarse language). Will likely lack interest for many children.

To help them raise their adopted daughter Mika (Malea Emma Tjandrawidjaja), Jake (Colin Farrell) and Kira (Jodie Turner-Smith) buy a nearly-new, yet refurbished, techno-sapien called Yang (Justin H. Min). Yang is like an older brother to Mika and is always there to assist her and help her maintain links to her cultural heritage, until the day he suddenly stops and cannot be restarted. Jake takes him to multiple places in an effort to do all he can to bring Yang back to life but when they discover a special chip believed to be spyware, expert help is needed. Slowly, Jake pieces together Yang’s story and finds that he had a life beyond his household. Yang had a friend named Ada (Hayley Lu Richardson) and he lived other lives, long before he became Mika’s brother. Increasingly, Jake, Kira and Mika begin to realise that Yang is not coming back and that they need to reconnect with each other and go on with their lives without him. At the same time, they realise that Yang does not belong to them alone and that his story needs to be shared.

Loss of a loved one; Grief; Interracial adoption; Prejudice; The perils of spyware.

After Yang is a slow paced, quiet film that offers viewers a different perspective on life and what is really important. Scenes are repeated for poignancy and certain images are held still and allowed to linger. While it showcases an interesting perspective on life and loss and the processing of grief, the film will likely be of little interest for younger viewers and will be best enjoyed by older, mature audiences.

The main messages from this movie are that 'there is not something without nothing'; that families come in all shapes and sizes; and that the end is also the beginning.