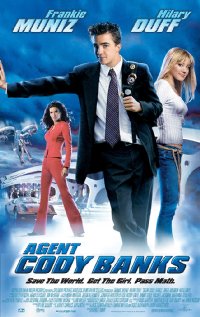 Cody Banks appears to be an average fifteen year old who loves skateboarding and gets tongue tied when talking to girls. Most of his student peers think he’s a bit of a sissy but there is something different about Cody Banks. While attending summer camps as a child he was secretly recruited by the CIA to become a teenage agent. He gets the call to duty when America’s security is threatened by a top scientist, Dr. Connors, who has created ‘nanobots’, microscopic robots that can be programmed to destroy matter. His intention is that they would be used for good purposes such as completely breaking up oil spills. However the US government fear that they could be used to destroy all manner of communications and defence systems. Therefore they decide to use Cody to get close to Dr. Connors’ daughter Natalie and uncover the secret technology.

Cody is transferred to an elite private school where he has trouble fitting in and trying to impress Natalie. As luck would have it however, he is in the right place at the right time to save Natalie’s fall from a ladder, for which she is very grateful and the two strike up a friendship. Cody is invited to Natalie’s birthday party where he discovers that the government’s fears have some foundation. Molay and Brinkman are the bad guys who are trying to make Connors use his nanobots against the US government. Cody discovers the laboratory and overhears their plans, however he is caught trying to leave and the chase is on. Meanwhile Molay and Brinkman decide to kidnap Natalie and hold her as an inducement to make Connors co-operate. The CIA takes Cody off the case but when he can’t get anyone from the agency to help rescue Natalie, he decides to go himself with dramatic results.

There is a lot of violence in this movie which is glamorised, successful and has few real life consequences including the following scenes:

There is a lot of material in this movie that would scare children in this age group. In addition to the violent scenes above the following scenes would also scare young children:

Children in this age group could still find the movie quite scary as the violence is quite realistic and Cody is often in much danger.

Children in this age group should be able to realise that the movie is only fantasy.

There are a few sexual references in this movie including a scene where Cody is given x-ray glasses and the first thing he does is look at Ronica Miles with them. He also looks at the waitresses in a restaurant and they are shown in their underwear.

There is no nudity but Ronica Miles appears in a revealing outfit with much cleavage.

There is no use of substances however the children at the birthday party are gambling on a roulette wheel.

The take-home message would be that good wins over evil but one would have to question the value of ‘good’ as the goodies use as many bad techniques as the baddies.