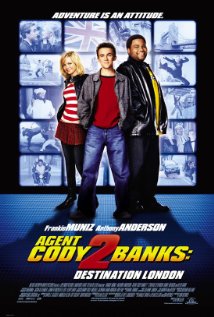 Not recommended under 8, PG to 13 (violence)

Agent Cody Banks is on Summer Camp which is in reality a CIA youth training camp, when it is attacked by men trying to capture the Commander in Chief, Victor Diaz. Banks helps him get away but is then informed that Diaz has stolen the software for a mind control programme which he intends to unleash on the world for his own evil purposes. Young Cody is given the task of retrieving the software and his mission takes him to London where he is sent undercover as a clarinet player in a youth orchestra. The music school in which he is enrolled is run by Lady Kenworth, wife of Lord Kenworth who originally wrote the software. Diaz intends to team up with Kenworth to take over the world.

Cody is assisted in his task by Derek another CIA operative who becomes employed at the music school as a chef and cooks up some interesting meals. Derek takes Cody to the London Dungeon where he is kitted out for his secret service with interesting gadgets, including a tube of Mentos which are really explosives. Meanwhile Diaz and Kenworth, with the aid of a mad dentist, have already begun their mind control programme by anaesthetising their first victim and implanting a microchip inside a dental filling. Cody manages to track down the place where this is happening but is set upon by Diaz, kidnapped and anaesthetised himself.

It seems as though the villains are winning as they manage to take over the Prime Minister and the director of the CIA but Derek comes to the rescue together with another unexpected source of help.

There is quite a bit of violence in this movie; however it is toned down from the first movie and most of the fight scenes are quite contrived with no-one getting particularly hurt. The following violent scenes appear:

Children in this age group are likely to be frightened by the above scenes and by the following:

There is some smoking of cigars. Lady Kenworth says she’s taken some cold medicine and now is “completely pickled”.

There is little coarse language with occasional use of arse and bleeding.

The take home message is that good once more triumphs over evil.