Ainbo: Spirit of the Amazon 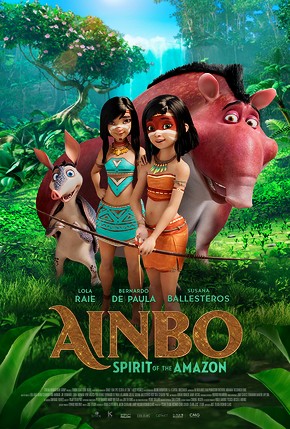 Not recommended under 8 and parental guidance to 10 (scary scenes and emotional themes).

This is the story of a fierce and adventurous thirteen-year-old girl called Ainbo (voice of Lola Raie) who lives deep in the Amazon rainforest with her tribe. Ainbo is a little different from the rest of her tribe as she was orphaned as a young child and has grown up in the home of the chieftain, along with her adopted sister and best friend Zumi (voice of Naomi Serrano). One day, Ainbo discovers that her tribe is in danger. Not only are they threatened by the evil spirit Yacuruna, but their habitat is being destroyed by logging and illegal mining. Together with her comical spirit animal guides, an armadillo called Dillo (voice of Dino Andrade) and a tapir called Vaca (voice of Joe Hernandez), Ainbo sets out to save her tribe. It is a perilous adventure which brings Ainbo face to face with the ancient spirits of the Amazon, her long-lost parents, and the evil forces that seek to destroy them.

There is no nudity or sexual activity in this movie, however our reviewer noted the following:

There are some very mild insults, for example:

Ainbo: Spirit of the Amazon is an animated adventure which is told from an Indigenous perspective, weaving authentic Amazonian rainforest folk lore throughout. The plot does get a little confusing and there are mixed messages about colonialism and destruction of the rainforest. For example, the film suggests that the bad behaviour of industries exploiting natural resources and indigenous land is driven by evil spirits – not just greed – which kind of lets them off the hook.  The graphics are colourful and engaging but also a little stilted, like a video game, rather than a feature film. The complex storylines and scary scenes make this film better suited to children over the age of eight.

The main message from this movie is that our connection to nature, and our communities, is what gives us strength and protects us.