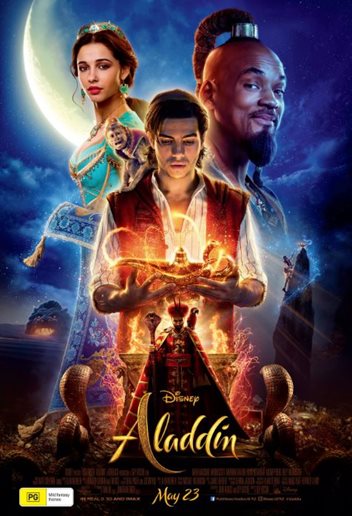 Aladdin is a live action adaptation of Disney’s original 1992 animation of the same name. When poor but goodhearted thief Aladdin (Mena Massoud), accidentally discovers a Genie (Will Smith) in a lamp, he is granted three wishes.  When Aladdin wishes to be a Prince so that he can win the heart of the beautiful and benevolent Princess Jasmine (Naomi Scott), things don’t go entirely to plan.  The scheming advisor to the Sultan, Jafar (Marwan Kenzari) begins to suspect that Prince Ali might not be who he says he is and comes up with a plan to steal back the magic lamp.  Aladdin, Jasmine, Genie, and the monkey Abu must stop Jafar from getting the lamp and taking over the city of Agrabah.

Aladdin is a live action remake of the classic Disney film.  It is visually exciting and has enjoyable performances from the central characters.  Will Smith as the Genie does an admirable job, retaining the comedy of the original film while making it his own.  Several new songs have been included that do not appear in the original, which may make the film feel slightly longer for younger children.  This film is suitable for all children over the age of 5, but parental guidance is recommended for children under 8 due to the mild fantasy themes and very mild violence.