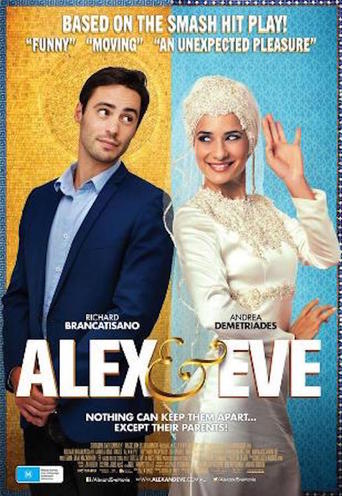 Not recommended under 15 due to coarse language and sexual references.

Alex (Richard Brancatisano) is a maths teacher at a high school in Sydney. He lives with his immigrant parents George (Tony Nikolakopoulos) and Chloe (Zoe Carides) who are devoutly Greek orthodox. Alex is a confirmed bachelor until one night when he is set up on a blind date with Eve (Andrea Demetriades) by his best mate Paul (Ryan O’Kane). Paul’s girlfriend Clare (Millie Samuels) works with Eve at a law firm where Eve is a lawyer.

Alex and Eve are instantly attracted to each other but there is a huge obstacle to overcome, as Eve is a Lebanese Muslim. Eve tries talking to her parents Bassam (Simon Elrahi) and Salwa (Helen Chebatte) about Alex but find they are both opposed to such a relationship. They have already promised Eve to a nice Muslim boy Mohomad (Hazem Shammas) and are determined that this match will go ahead. Alex and Eve have different ideas however, but try as they might they cannot persuade either set of parents.

Children in this age group may also be disturbed by the family arguments and when Eve’s brother Shadi, who is a scary looking character, threatens to kill Alex on a few occasions.

Younger viewers in this age group may be disturbed by the attitudes to women and girls seen. Examples include:

Alex and Eve is a romantic comedy about a couple from different cultures and religions who are forbidden by their parents to see each other, causing much emotion and some laughs. It is a current and sensitive topic, and very well portrayed but the coarse language and sexual references in the movie make it more suited to a mature audience. It is therefore not recommended for viewers under 15.

The main messages from this movie are that love can overcome all obstacles and that it’s better to find what different cultures have in common rather that what separates us.