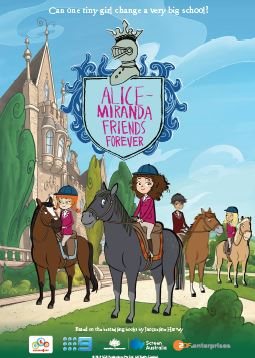 Alice-Miranda (Maisy Wright-Smith) is the youngest girl at her boarding school. She arrives to find a very unhappy staff governed by the reclusive Principal Ms Grim (Michelle Doake) who has not been seen for the past 10 years. With her cheerful nature and uncanny ability to always see the best in others no matter how badly they may treat her Alice-Miranda, with the help of her new found friends Millie (Lila Tapper) and Jacinta (Lola Carlton), embarks upon a series of plans aimed at bringing joy and comfort to everyone around her. The elusive Principal Grim, however, has other plans and devises a scheme to get rid of Alice-Miranda for good. Through hard work, intelligence and a little support from the people she has already helped Alice-Miranda overcomes every obstacle placed in front of her and helps countless others along the way. When a new girl arrives at school and is instructed to sabotage test scores and tarnish records it looks like the neighbouring school may be forced to close its doors but through the connections and friendships Alice-Miranda has already made, and with help a little help from an unlikely ally, she just may be able to help save the school, heal hearts and reunite long lost sisters before the day is done.

The notion that many parents are too busy to look after or care for their kids, personally isolating or secluding yourself when things go wrong, bullying and or sabotaging others for personal gain.

Alice-Miranda Friends Forever is an animated drama that highlights the importance of kindness and compassion under all conditions. The animation is fairly simplistic but the cast is extremely diverse, featuring characters from different ethnic and religious backgrounds as well as characters with special needs. The movie will likely appeal to a young, female audience as well as fans of the books on which the movie is based.

The main messages from this movie are to be kind to others, to always do your best and remember that there is good in everyone no matter how mean they may be.