Alice through the looking glass 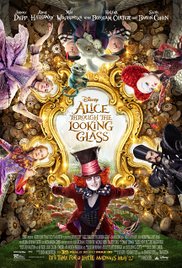 Not recommended under 10; parental guidance recommended 10 to 13 (Violence; scary scenes)

Alice through the looking glass is the sequel to Alice in Wonderland. Alice (Mia Wasikowska) is now older and has spent her last few years travelling the world on a ship. When Alice returns home she discovers that her mother (Lindsay Duncan) is in a dispute with Hamish Ascot (Leo Bill) and faces a difficult decision. To escape the real world Alice climbs through a mirror and finds herself, once again, in Wonderland (or “Underland”). Alice learns that her beloved friend Mad Hatter (Johnny Depp) is ill and she must go on an adventure through time if she wants to save him.

Nothing of concern in the film, but associated merchandise being marketed to children

Alice through the looking glass is the sequel to Tim Burton’s movie Alice in Wonderland, based on the books by Lewis Carroll. The movie is an exciting magical adventure with a strong female role model. Fans of the first movie are likely to enjoy returning to the magical and enchanting world of Alice. Due to the violent and scary scenes the film is not suitable for children under the age of 10 and parental guidance is recommended for children in the 10 to 13 age group.

This movie could also give parents the opportunity to discuss with their children the real life outcomes of stealing and lying.