Aliens in the Attic 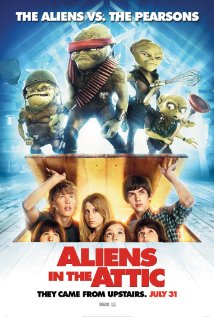 Not recommended under 8, PG to 13 (Violence, themes)

Fifteen year old Tom Pearson’s (Carter Jenkins) life is not looking good. He is sick of being called a ‘brainiac’ and ‘mathlete’ and has spent the last term of school purposely failing his classes. He is being forced to go on a family vacation with his parents Stuart (Kevin Nealon) and Nina (Gillian Vigman), his older sister Bethany (Ashley Tisdale) and his little sister Hannah (Ashley Boettcher). They are going to an ancient lake house in the country where they will be joined by his Nana Rose (Doris Roberts) and Uncle Nate (Andy Richter), and his cousins Jake (Austin Butler) and Jake’s twin brothers Art (Henri Young) and Lee (Regan Young). Bethany’s smooth operating boyfriend Ricky (Robert Hoffman) arrives and gets himself invited to stay the night after arranging for his car to break down.

That night during a storm, four aliens arrive and start attacking the children. They learn that the aliens are after an extraterrestrial machine that is buried beneath the house and will stop at nothing to get it, as they are planning to invade the world and enslave the human race. The aliens use a mind controlling device to turn their victims into zombie-type aliens, the first victim being Ricky. In an effort to protect their parents, the kids decide to launch a war against the alien invaders to save themselves and all mankind.

There is some violence in this movie, some of which may be imitated by children. Examples include:

and name calling such as:

Aliens in the Attic is an adventure comedy that will appeal to a wide range of children but is one that is better suited to teen audiences and anyone who enjoys mindless entertainment.

The main messages from this movie are to be true to yourself and not to judge people, (or even aliens), on first impressions alone.