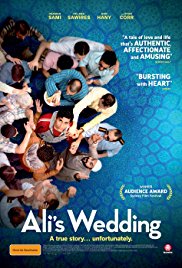 Not suitable under 12, not recommended under 15, due to violence, sexual references and coarse language

The film’s opening scene depicts Ali (Osamah Sami), dressed for a wedding, driving a tractor across a field while being pursued by the police. The pursuit ends with Ali leaping from the tractor just before it crashes into a police car.

The film then portrays Ali’s childhood as a series of flashbacks in which we learn that Ali and his family were Iraqi refugees who escaped into Iran where they suffered abuse and tragedy until they migrated to Australia. The film then skips to the present day, but sometime before the film’s opening scene.

Ali, the oldest son of Mahdi (Don Hany), a Muslim cleric, has had a lifelong dream, or at least his family has, of Ali becoming a doctor. When Ali fails to do well enough, he lies and tells them that he has been accepted into medical school.

Ali’s life becomes even more complicated, requiring even more lies when he falls in love with Dianne (Helena Sawires). Dianne is an Australian-born Muslim of Lebanese decent, who is seen by Ali’s mother Zahra (Frances Duca) as totally unsuitable. Ali’s family organises an arranged marriage, resulting in Ali becoming engaged to Yomna (Maha Wilson). But Ali loves Dianne and temporarily marries her without telling her that he is engaged to Yomna.

Eventually Ali’s lies catch up with him and his life falls apart, but Ali refuses to give up.

There is some violence in this movie, some played for comedy and some more scary, including:

Children in this age group are likely to be distressed by the above-mentioned scenes and also by some scenes of accidental harm such as the tractor crashing into the police car and Ali flying through the air.

Younger children in this group may be upset by the death of the boy who steps on a landmine.

The film contains overt and covert sexual references and innuendo scattered throughout.  Examples include:

The film contains coarse language and name-calling scattered throughout the film. Examples include:

Ali’s Wedding is a feel-good Australian comedy romance targeting older adolescents and adults. The film has a genuine warmth and cultural authenticity about it and is likely to be enjoyed by the target audience. The film raises some interesting and current issues to discuss with older teens, but is not recommended for under 15s due to some violent scenes, sexual references and coarse language.