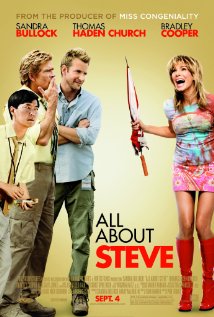 Mary Horowitz (Sandra Bullock) writes cross word puzzles for a local paper. She lives at home with her parents and is socially awkward but not shy about passing on a torrent of esoteric facts to anyone in ear shot.

Worried that she needs a little romance in her life, Mary’s parents set up a blind date for Mary, a cable news cameraman named Steve (Bradley Cooper). Initially, Mary is resistant to the whole affair, but when she sets eyes on Steve she is immediately attracted to him, throwing herself at him as soon as they get into his car. The encounter ends when Steve is called away to cover a breaking news story. Before leaving, he half-heartedly suggests that Mary could accompany him on the road, an offer that Mary must refuse because of her work commitments. Mary is so infatuated with Steve that her next crossword puzzle is ‘all about Steve’, which causes the local paper a great deal of embarrassment and results in Mary being fired.

Remembering Steve’s invitation, and no longer tied to work commitments, Mary decides to take up his offer to accompany him on the road. She boards a bus to Tucson and, after a near miss, tracks Steve down and confronts him. Fearing Mary to be some type of crazed stalker, Steve plans to end the relationship before it gets started. However, in an effort to torment Steve, Steve’s co-worker/newscaster presenter, Hartman Hughes (Thomas Haden Church) encourages Mary to pursue Steve regardless of what Steve might say. As a result, when Steve tells Mary that he has no interest in her and wishes her to leave, Mary ignores him.

With two new found friends Howard (D.J. Qualls) and Elizabeth (Katy Mixon), Mary chases Steve across the country from one news story to another, with at times disastrous consequences that jeopardise Steve’s job.

All About Steve contains some slapstick style violence and talk about violence. Examples include:

In addition to the above-mentioned violent scenes, there are some scenes in this movie, particularly of accidental harm, that could scare or disturb children under the age of five, including the following:

All about Steve contains sexual references and innuendoes throughout. Examples include:

All About Steve contains some partial nudity and sexual activity. Examples include:

All About Steve contains mild coarse language throughout, some name calling and some crude references. Examples include:

All about Steve is a romantic comedy targeted at older adolescents (over sixteen years) and adults. Much of the film’s humour revolves around crude sexual innuendo and mockery of those who do not fit with what society views as the norm.

This movie could also give parents the opportunity to discuss with older children attitudes and behaviours, and their real-life consequences, such as: