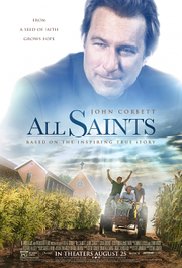 Not recommended under 8 due to lack of interest and themes. Parental guidance recommended 8 to 10.

All Saints is an adaptation of an inspiring true story. An Episcopalian church in Tennessee is faced with closure after the congregation becomes so small that the church can no longer afford the mortgage. New minister Father Michael Spurlock (John Corbett), a former paper salesman, is charged with helping the congregation adjust to the sale of their community church. In his first week of service, some recently arrived refugees from Myanmar seek out his help. They are Karen people, devout Anglicans who have fled persecution and war, survived refugee camps and have finally arrived in America to begin a new life.

Despite some initial reservations of the conservative congregation, the Karen refugees bring new life and vitality to the church. Ye Win (Nelson Lee) is the stoic and kind leader of the Karen, striving to look after his people in their new country. He convinces Pastor Spurlock to let him plant a vegetable garden in the grounds of the church to help feed the many families that are arriving. This leads to a revelation for Pastor Spurlock who believes that it is God’s will that they save All Saints church by turning the surrounding fields into a farm. The farm will feed the Karen families and save the church from being sold. Against all odds, the congregation pull together to try and save their church.

Nothing apart from the violent scenes described above

All Saints is a heart-warming, emotional story that touches very lightly on serious and current topics such as war, persecution and asylum seeking. Although it is written from a Christian faith perspective, the themes of community and humanitarianism are universal and relevant.

The film is not recommended for children under 8 due to themes and lack of interest. Parental guidance is recommended for the 8 to 10 age group, and there are issues for parents to discuss with older children.

The main messages from this movie are that everybody, from whatever background, has something rich and valuable to add to their community and that amazing things are possible if everybody works together.