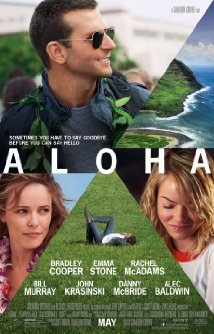 Not recommended under 14 due to story and themes more suited to older viewers.

Aloha is the story of Brian Gilcrest (Bradley Cooper), a former air force pilot who has begun working as a defense contractor after suffering a physical injury while in Afghanistan on business.

Having not been to Hawaii for several years, Brian travels back there at the request of his boss, Carson Welch (Bill Murray). In an awkward turn of events, his pilot is John ‘Woody’ Woodside (John Krasinski), the man who is now married to Brian’s ex-girlfriend Tracy (Rachel McAdams). While in Hawaii, Brian also meets Alison Ng (Emma Stone), a fiery and enthusiastic air force pilot with a bright future.

What unfolds is a complicated story of romance, truth and betrayal – Brian and Alison develop strong feelings for one another, Carson is recognised as a morally bankrupt individual who is on a mission for power and financial gain, and Brian discovers that he is the father of Tracy’s twelve-year-old daughter.

There is mild sexual activity and partial nudity, including:

There is mild use of substances, including:

Aloha is a romantic comedy-drama about love, redemption and taking chances. It follows Brian as he learns to forgive himself for his past indiscretions, and allows himself to fall in love all over again with the woman of his dreams – someone who challenges him to improve himself and strive to be better. The film highlights the rewards of taking a chance with other people and new experiences, whilst also remaining cautious at times about the motivations of those who seek power and authority. Although there is little in the film to disturb young children, the story and themes make it more suited to older viewers, so it is not recommended for children under 14.