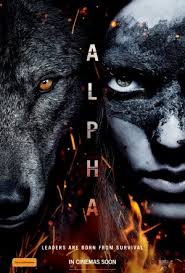 Not recommended under 12, parental guidance to 15 due to use of subtitle, violence, and scary scenes

In Palaeolithic Europe (20,000 years ago) a young teenager “Keda” (Kodi Smit-McPhee), son of the tribal chief, is finally permitted to join the other hunters of his tribe on their annual bison hunt. The journey is long and arduous and Keda’s mother Rho (Natassia Malthe) is worried that her son is not yet ready for such danger (and killing). She is reassured by the chief (Jóhannes Haukur Jóhannesson) that her son has the strength to survive and to help provide for the tribe. As they travel towards the bison, following on ancient pathways marked by their ancestors, it is difficult for Keda to live up to his father’s expectations and his confidence wavers. When they finally make it to the bison, Keda is tragically separated from his tribe and finds himself alone and injured in the wilderness. Whilst defending himself against a pack of wolves, Keda causes serious harm to one of the wolves who is left bleeding and close to death. His kind heart makes him pity the dying creature and he nurses her back to health. Slowly the animal starts to trust Keda and their relationship develops into one of mutual comfort and help. Keda names her ‘Alpha’ (played by chuck, the Czechoslovakian wolfdog) and together they start back towards Keda’s tribe. The journey is full of peril and near-death experiences, but the dog and the young man must work together to survive.

Alpha is a gripping and visually spectacular tale of peril and survival which seeks to explain the origins of the human-dog relationship. Although it is rated PG, children will need to be confident readers to keep up with the subtitles. Children who are not able to read the subtitles will be able to understand the gist of what is being said and will likely enjoy the movie without being able to read them. However, due to a sense of constant peril and some scary and emotionally charged scenes this movie is more suited to older children. Parents should be aware that there is some controversy as to whether bison were harmed in the making of the film.

The main messages from this movie are that we need others to survive, and that you can find strength within yourself to keep on going, even when it looks like there is no hope.