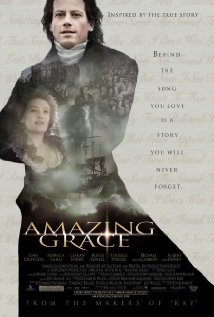 Amazing Grace is a powerful period piece, set in a time when the British Empire held powerful influence on the world’s political stage.  In a time when social change was discouraged and the slave trade affluent and politically powerful, there is one man who has the courage to take on the battle of becoming an antislavery pioneer.
Wilberforce (Ioan Gruffudd) is only 21 years when he takes on the noble task of leading the cause for the abolition of slavery.  Encouraged by his good friend William Pitt (Benedict Cumberbatch), who has been elected as England’s youngest Prime Minister, Wilberforce is elected into the House of Commons and henceforth commences his 20 year battle to fight the anti-slave cause.
Throughout his crusade, Wilberforce questions his career as political activist and considers a life of spirituality.  However with the support of a small group of mismatched but passionate individuals, Wilberforce is encouraged to use his political influence to do God’s work through the political arena.
Wilberforce’s fight for the abolition of the Slave Trade is a long and arduous one, and a struggle that takes its toll on his emotional and physical health.  Just when Wilberforce is about to give up on his life-long passion, he finds love and with it a resurgence of energy to continue his battle.

In addition to the above mentioned violent scenes, there are some scenes and themes in this movie that could scare or disturb children under five, including the following:

Children in this age group are also likely to to scared or disturbed by the above-mentioned scenes.

Children in this age group are also likely to to scared or disturbed by the above-mentioned scenes.

Some children over 13 may also be disturbed by some of the above-mentioned themes and scenes.

Amazing Grace is a powerful movie made around the important and historically significant event of the abolition of slavery.  Despite its inspiring message, this movie contains a number of images and themes that may be distressing for many children particularly those within the younger age groups.   For older children, this will be a movie that highlights many important messages about the power of one individual to make a change in the world for the better.

This movie could also give parents the opportunity to discuss with their children attitudes and behaviours, and their real-life consequences, such as the effects of political power and class systems on the lives of the powerless.