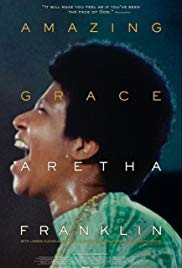 Suitable for all ages though may lack interest under 13

The documentary Amazing Grace showcases the raw talent of Aretha Franklin at the peak of her career and treats fans to the music Aretha grew up singing. Together with the Southern California Community Choir and the accompaniment of Reverend James Cleveland, Aretha puts on a two-night performance of Baptist Gospel music at the Los Angeles Missionary Baptist Church in January 1972. The album recorded at this event became the bestselling live gospel album of all time. The performance was filmed by Warner Brother Producer, Sydney Pollock, who had the wisdom to film this monumental event.

Devotion to Jesus; Baptist Gospel; the importance of family; community; and inspiring others.

It is unlikely that anything in this movie would frighten children over the age of thirteen.

Amazing Grace is a documentary showcasing Aretha Franklin in a performance that turned out the best-selling gospel music of all time. The camera angles and quality are similar to what you would find in a home movie and, while the film is suitable for all audiences, it will largely be enjoyed by fans of Aretha Franklin or Baptist Gospel music.

The main messages from this movie are to remain true to your roots, to find inspiration and make it your own, that Jesus loves you and that anything is possible with His help.

This movie could also give parents the opportunity to discuss with their children the importance of having a sense of community, be it religious or secular; the importance of praising, accepting and encouraging family members; and how some hearts can be healed through music, especially when it is divinely inspired.