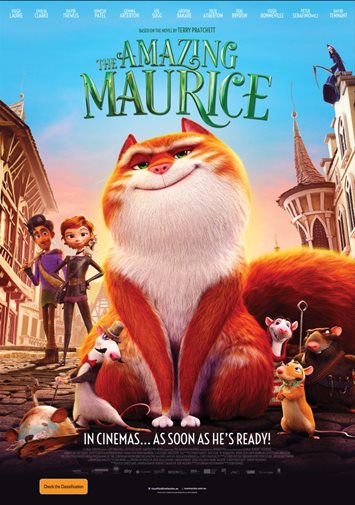 Maurice (Voice of Hugh Laurie) is a street-smart cat, who together with his human pal, Keith (Himesh Patel), and their band of talking rats, manage to convince local townsfolk that their town has a rat problem. They are then paid to remove the rats, which Keith does by playing his pipe while the rats follow him out. That’s the story according to Malicia (Emilia Clarke) the Narrator, but when she decides to enter the story herself, things get more complicated.

The trio and the band of rats come across a town where all of the rats have disappeared and the food has all been stolen. It transpires that the rat king is luring all of the rats to himself to make his powers stronger and that he uses two henchmen to steal all of the food. Malicia, who is all for a good adventure, sets out to solve the mystery, dragging the reluctant Keith and the cowardly Maurice along with her. The three face many perils, as do the rats themselves, but in the end it is Maurice who saves the day.

There is some slapstick violence in this movie, done for laughs, including:

The Amazing Maurice, based on the book by Terry Pratchett, is an animated fantasy/fairy story, and fast moving adventure. The story is quite complex and rather dark in places. The film is therefore not suitable for children under 6 and parental guidance is recommended for 6 – 7-year-olds.

The main messages from this movie are to make your own story and to find your own abilities.