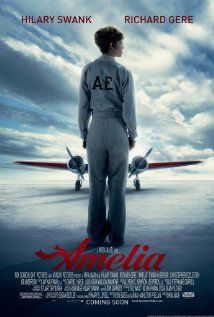 Not recommended under 8, PG to 12 (Lack of interest, scary scenes, language, sexual references).

The film Amelia is based on the exploits of female aviator Amelia Earhart (Hilary Swank). It opens in 1937 with Amelia sitting in the cockpit of her plane just before taking off on her ill fated around the world flight. The story then jumps back and forth between the years 1928 and 1937.

A younger Amelia enters the office of publicist George Putnam (Richard Gere) and asks for assistance in making her the first woman to fly across the Atlantic Ocean. The adventure turns out to be more of a publicity stunt rather than pioneering feat, as Amelia is given the role of commander while a male did the actual flying. However, the stunt brings Amelia to attention of the American public providing her with lucrative advertising deals promoting clothing, luggage and cameras, all of which provides Amelia with the necessary funds to continue her flying exploits.

Not content with being the first woman to fly across the Atlantic, Amelia announces that she intends to become the first person to fly around the world. Her first attempt ends in disaster when her plane crashes on take off. The plane is repaired and Amelia and navigator Fred Noonan (Christopher Eccleston) make their ill-fated second attempt.

No person to person violence

Amelia contains a number of scenes of people in danger and accidental harm which may scare young children. Examples include

While there is no actual product placement, the use of Amelia herself to promote various product lines for profit is depicted. These products included luggage, clothing, cameras and cigarettes.

There is some use of substances in this movie, including alcohol and cigarettes. Examples include

Amelia is a biographical drama that looks at the adult life of female aviation pioneer Amelia Earhart. Hilary Swank gives a fine performance as Amelia and also looks very much like her and Richard Gere also gives a solid performance. Attention to historical detail is first rate, but the film is a little slow and repetitive at times, so will lack interest for younger viewers.

This movie could also give parents the opportunity to discuss with their children attitudes and behaviours, and their real-life consequences, such as George Putnam’s initial interest in using Amelia for her looks rather than flying skill and the subsequent use of Amelia’s celebrity status to sell products.