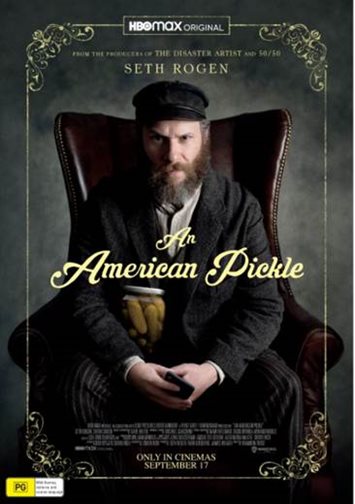 Not suitable under 12; parental guidance to 13 (violence, themes)

In 1919, Eastern Europe was a grim place for Russian Jews, who were often attacked by Cossacks. So, Herschel Greenbaum (Seth Rogen) takes his wife Sarah (Sarah Snook) and they flee to America. Herschel finds a job in a local pickle factory, where, unfortunately, he falls into a vat of pickled fish. This goes unnoticed and Herschel remains there, preserved in the pickle brine, for 100 years. That is, until two young boys discover Herschel when they follow their drone into the abandoned factory and open the vat.

Herschel wakes up to modern day Brooklyn. He’s taken into hospital where they find his only living relative, his great grandson Ben Greenbaum (Seth Rogen). Ben initially takes Herschel in but they soon fall out as friends due to their opposing views on just about everything. Herschel makes money by doing what he knows, pickling fish and selling them, and he rises in notoriety while Ben struggles to make a living. Ben plots Herschel’s downfall by using social media as a way to expose the outmoded values Herschel still holds. Herschel is eventually driven out of America and escapes to Canada where he and Ben manage to reconcile their differences.

An American Pickle is a comedy that reflects on the changing values between the early 20th and 21st centuries. Herschel is a character used to speaking his mind and, using hate speech, he attacks a lot of current values such as equality of gender, race and religion. It refers to the use of free speech and the ‘right to offend’. As such, younger viewers could misunderstand a lot of the themes and the movie is therefore not recommended for children under 12. Parental guidance is also recommended for children aged 12 – 13 given some of the extreme comments that are made in the movie.

The main messages from this movie are the importance of family and the need to compromise to achieve success.