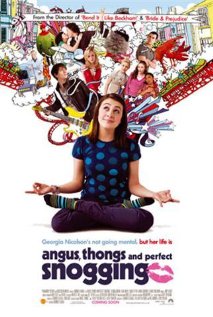 Not recommended under 8; PG to 13 (Themes, coarse language)

Angus, Thongs and Perfect Snogging depicts several months in the life of 14 year-old Georgia Nicolson (Georgia Groome).  Georgia desperately wants to become more attractive and popular so that she can get a boyfriend but most of her attempts at self-improvement go horribly wrong, providing several funny moments.
When Georgia and her friends Jas (Eleanor Tomlinson), Rosie (Georgia Henshaw) and Ellen (Manjeeven Grewel) spot two handsome new boys at school, Tom (Sean Bourke) and Robbie (Aaron Johnson), the girls begin plotting to gain their attention.  After one comic attempt to impress the boys by asking them to search for Georgia’s ‘missing’ cat (Angus), Tom begins dating Jas.  Shortly after, Georgia is disappointed to learn that Robbie is already seeing another girl, yet continues in her quest to attract him.
Meanwhile, Georgia’s father has temporarily moved to New Zealand for his work and Georgia suspects that her mother is becoming involved with an attractive young interior decorator she has hired.

Apart from the above-mentioned violent scenes, children are unlikely to be disturbed by anything in this film

Apart from the above-mentioned violent scenes, children are unlikely to be disturbed by anything in this film

There is some alcohol use (by adults) depicted in this movie.

Angus, Thongs and Perfect Snogging is a lightweight English romantic comedy directed by Gurinder Chadha.   This film is based on the best-selling novel by Louise Rennison and is pitched at a young female audience.

The main message from this movie is to accept yourself the way you are.
Values in this movie that parents may wish to reinforce with their children include:

This movie could also give parents the opportunity to discuss with their children the importance of being who you are, rather than who you think others want you to be.