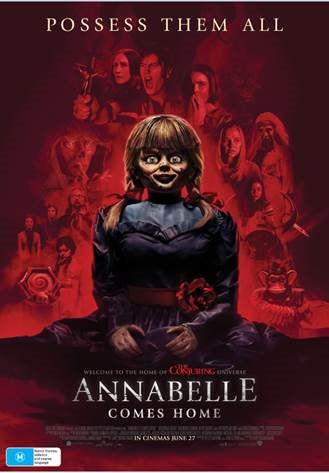 This third movie in the Annabelle series finds paranormal investigators Ed (Patrick Wilson) and Loraine Warren (Vera Formiga) wrapping up a case involving Annabelle. They decide to bring the doll back to their house and lock her in a room in a special case designed to contain the evil she possesses. When they have to go off to work on another case they enlist the help of their trusty babysitter Mary Ellen (Madison Iseman) to look after their daughter Judy (McKenna Grace). A newspaper article explaining the work the Warrens do has recently been published causing no end of drama for Judy who faces ostracism from her peers and enlightening Mary Ellen’s friend Daniela (Katie Sarife), who blames herself for her father’s untimely death and who takes the opportunity to visit and see if there is anything useful in the house that could help her contact her father. Despite Mary Ellen and Judy’s warnings and with a little demonic help Daniela finds her way into the forbidden chamber where she unwittingly releases Annabelle who unleashes all the forces of hell contained in that room to help her on her ultimate quest to possess a soul. With the help of the neighbour boy Bob (Michael Cimino) the girls must survive the night and try to recapture Annabelle before she destroys them all.

Death of a parent, ghost and demon hunting, communicating with the dead, items and people being possessed.

There is a TV screen in the room that Daniela is locked in that shows a few moments into the future and it repeatedly shows Daniela the terror that is in store for her. When she can’t take any more she turns her back to it and is huddled over in terror. The screen shows that she will answer the phone and that the moment she does she will meet a violent and bloody death. Then the actual phone begins to ring, Daniela slowly moves towards it reaching out to answer it. She is stopped in the nick of time by Judy and Mary Ellen.

There are some minor sexual references in this movie, including:

Annabelle Comes Home is a horror film based on the real life accounts of Ed and Lorraine Warren. While the plot is fairly predictable, the characters are solid and there are plenty of jump scares that will keep viewers on the edge of their seats.

The main messages from this movie are that good will ultimately triumph over evil, that not all ghosts are bad and that some things are better left alone.