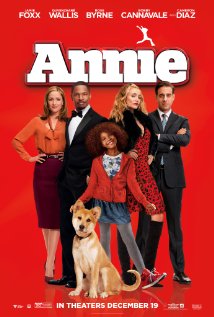 Not recommended under 10; parental guidance recommended 10-13 (Scenes that might scare young children; Themes)

Annie is a contemporary adaptation of the Little Orphan Annie story, set in present-day New York. Annie (Quvenzhané Wallis) is a young and happy girl in foster care who is also street-wise and able to take care of herself in the big city of New York. Having been abandoned by her parents as a baby, she was taken in by a mean-spirited and alcoholic foster carer named Ms Hannigan (Cameron Diaz).

One day, in a surprising turn of events, Annie is saved from being run over by a truck by business tycoon Will Sacks (Jamie Foxx). Will’s campaign manager decides that his client should adopt her in order to humanise him in the eyes of the public, leading Annie to be whisked away to a new penthouse apartment. Throughout the film, Annie continues her search for her birth parents.

Family; identity and heritage; social class and the rich versus the poor; foster care

In addition to the above-mentioned violent scenes there are some scenes in this movie that could disturb children aged five to eight, including the following:

There is mild coarse language in the film, including the terms:

Annie is a film that looks at the challenges of being a young person in contemporary society and offers a heart-warming look at the formation of an unexpected family, and the growth, development and independence of Annie’s character.  It highlights the notion that family is not merely biological and that, wherever there is strong enough love, life-changing relationships can be formed. Although there is little in the film to disturb young children, the themes make it best suited to tweens and teens, with parental guidance recommended for the 10 -13 age group.