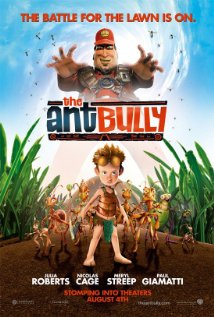 Not recommended under 5, PG to 8 (Viol. Scary scenes. Theme)

Lonely Lucas Nickle (voiced by Zach Tyler) would like nothing better than to play with the neighbourhood kids but every time he sets foot outside his home he becomes the target of the neighbourhood bully, who believes that his size gives him the right to pick on those who are smaller than he is. Consequently Lucas unleashes his pain and anger on the ant colony in his front garden thereby earning the name The Destroyer.

Determined to save the colony from future attack and total annihilation the ant wizard Zoc (Nicholas Cage) devises a plan that involves shrinking Lucas to the size of an ant and bringing him to justice at the colony’s tribunal. The Queen (Meryl Streep) has a slightly different plan and decrees that Lucas be sentenced to a life of hard labour where he must learn to become an ant before he has any hope of returning home.

Hova, (Julia Roberts) the only ant in the colony that believes there is some good in Lucas, volunteers to help him. At first Lucas is more concerned with helping himself than with learning the ways of the ant, but when their colony and lives are threatened, Lucas begins to see the importance of working together for the common good.

Some children at the younger end of this age group, or those who have been subject to bullying, may be disturbed by the scenes described above.

The exterminator smokes a cigar.

The word ‘crap is used a number of times.
There is also a fair bit of name-calling, including the use of Pukis, Loser, and Stupid on a number of occasions.

The Ant Bully is a computer-animated cartoon with excellent graphics and action scenes. It has a very predictable plot but is well cast, and older children will probably enjoy it. The main messages are that even those who appear to have nothing in common can turn out to be very much alike and that the impossible can be accomplished if all work together toward a common goal.

This movie could also give parents the opportunity to discuss the issue of  bullying and of the having an attitude of ‘every man for himself’.