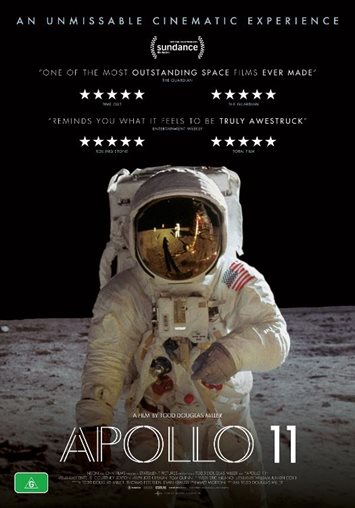 Not recommended under 8; parental guidance to 10 (possible lack of interest)

Apollo 11 is a documentary using actual audio recordings and historical footage, including some never before seen images of NASA’s lunar landing. Everything is covered, from the on-going preparations made pre-launch to the intricacies of the mission itself and the astronaut’s re-entry to Earth. Viewers are given a detailed glimpse at what was once the most dangerous and difficult mission humans had ever embarked upon. As well as gaining a better understanding of the three main astronauts (Neil Armstrong, Buzz Aldrin and Michael Collins) and what they went through, viewers are shown all the teams working together around the clock at both the Kennedy Space Centre and Houston Control and the countless individuals whose roles played a pivotal part in the success of the mission. The movie conveys a sense of what the world was like at the time of the lunar landing and how achieving this goal was not only a victory for the United States but for all humanity.

Teamwork, the interconnectedness of humanity, humankind’s constant desire to explore further and farther than ever before, courage when facing the unknown and the fulfilment of dreams.

It is unlikely anything in this movie would scare or disturb children over the age of thirteen.

Apollo 11 is a historical documentary comprised of actual footage from this unprecedented mission and lunar landing. This movie will likely appeal to space enthusiasts, historians and older, mature, audiences.

The main messages from this movie are to quite literally reach for the stars, to work as a team and that with great persistence, determination and courage anything is possible.

This movie could also give parents the opportunity to discuss with their children the importance of working together to achieve a goal. While three men made the mission to the moon, countless others made it possible and had any one of those individuals not done their job the journey could have ended quite differently.