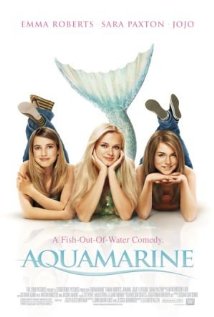 Hailey (Joanna ‘JoJo’ Levesque) and Claire (Emma Roberts) are thirteen years old, the best of friends, and are spending their last summer vacation together before Hailey relocates to Australia. They spend a lot of time at the beach, trying to get the attention of Raymond (Jake McDorman) a young blond lifeguard, but must compete with the older, more sophisticated and more developed bikini clad Cecilia (Arielle Kebbel) and her two sidekicks.

One night during a violent storm, Hailey, sad at her impending separation from Claire, calls upon ancient sea gods to keep her and Claire together. Suddenly giant waves are created by the storm and a mermaid named Aquamarine (Sara Paxton) is washed into Claire’s swimming pool. Hailey and Claire find her, and the three become good friends. The girls discover that Aquamarine is being forced into an arranged marriage which she can only avoid if she convinces her father that love isn’t a myth by making a boy fall in love with her.

The girls agree to help Aquamarine to win Raymond’s heart, and in return Aquamarine will offers them a wish each, which they intend to use to prevent them from being separated.

There is some physical violence in this movie including:

It is worth noting, that the lead female characters behave spitefully towards each other, and engage in frequent mean spirited teasing and emotional manipulation. Examples include:

In addition to the above-mentioned scenes and verbal exchanges, there are some scenes in this movie that could scare or disturb children under the age of five, including the following:

There is some coarse language, including:

There are also several instances of put-downs and name calling.

Aquamarine is a romantic comedy targeting young girls aged eight to thirteen years with little appeal to younger males. The film focuses on friendships, relationships with the opposite sex, and on teenage girls’ fixation with body image. The film’s main positive message is that love can exist in more than one form and can be found when unlooked for, and that friendship can conquer the greatest of odds. However, the film does contain some negative messages in terms of spiteful behaviour between teenage girls and emotional manipulation.

Values in this movie that parents may wish to reinforce with their children include selflessness, courage and honesty. Parents may wish to discuss the unrealistic nature of teen girl magazines and how Hailey and Claire’s worshipping of these magazines is unrealistic and possible harmful, with their emphasis on physical appearance and manipulative methods of meeting emotional needs. Parents may also wish to discuss the incident in which the girls catch a bus to a shopping mall without their parents’ permission, and point out the possible real life dangers and threats associated with this rebellious behaviour.