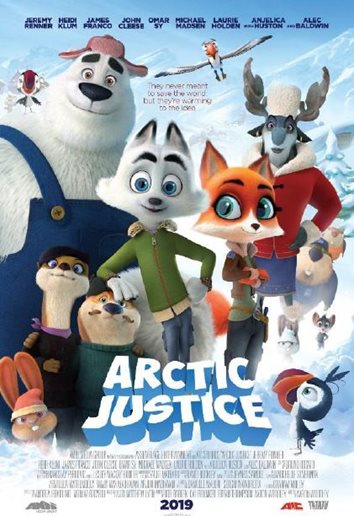 Not suitable under 5; parental guidance 5-6 (Violence and scary scenes)

Swifty (voice of Jeremy Renner) (and Young Swifty - Anderson Lewis) is a young arctic fox who feels he’s invisible because his colour blends so well into the environment. He admires the top dogs, particularly Duke (Mike Medson), who deliver the all-important packages to the residents of Taugasville. Swifty dreams of becoming top dog one day (even though he’s a fox) and works hard to follow his heroes. When he does grow up, he gets a job processing parcels at ABDS (Arctic Blast Delivery Service). Swifty’s friend Jade (Heidi Klum) has returned to Taugasville after completing an engineering degree. She asks Swifty to deliver some important parcels to Otto Von Walrus (John Cleese). Swifty is dismayed when he finds Otto to be an aggressive, nasty walrus who walks on robotic legs.

Swifty’s curiosity is roused and he returns to Otto Von Walrus’ cave to discover what Otto is doing behind the iron doors of his house. He finds that Otto is building a huge drill to drill into the Arctic shelf and destroy the polar caps to bring on climate change. Swifty and his friends have a hard job ahead of them to prevent Otto carrying out his menacing plans. Swifty also realises he can use his invisibility to his advantage.

Arctic Justice is an animated comedy/drama made for children. The movie alludes to climate change but doesn’t really explain it and may lack interest for older children. There is a lot of slapstick violence and other menacing threats that could scare young children. It is therefore not suitable for under 5’s and parental guidance is recommended for 5-6 year olds.

The main messages from this movie are that good triumphs over evil and that we all have our own unique talents.

This movie could also give parents the opportunity to discuss with their children the importance of looking after the environment.