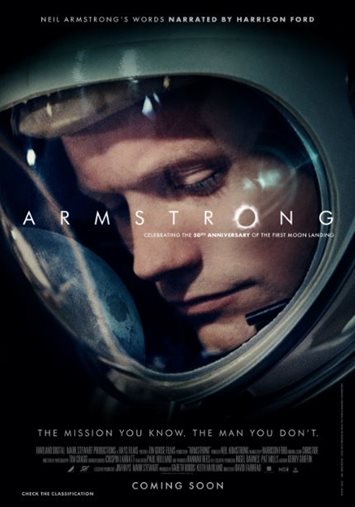 Not recommended under 8, parental guidance 8-9, suitable for 10 and over (themes, lacks interest for younger children)

Through the use of interviews, personal letters and family home videos the movie, Armstrong, shares the remarkable story of Neil Armstrong (voiced by Harrison Ford). A young boy growing up in rural Ohio who, from the time he was a small child, was fascinated by planes and how they worked; Armstrong learned to fly before he could drive and went on to become one of the most famous men in history. Audiences get a real glimpse into the quiet life Armstrong led and come to appreciate the man that he was, whether as a fighter pilot in the Korean War, an engineering student at Perdue university, a husband and father, or part of the NASA space program. Sharing his story, family and friends attest to his quiet kindness, his unshakable calm and his hard-working nature that saw him rise through the ranks to become the first man on the moon and who, in a moment of glory, helped unite a troubled world.

War; the perils of a dangerous job; family breakdown; and the loss of a child.

Armstrong is a biographical documentary based on the extraordinary life of Neil Armstrong. It draws heavily on interviews with family and friends and incorporates historical clips from NASA, news and press conferences. The film will appeal to space enthusiasts and older audiences.

The main messages from this movie are to follow your dreams wherever they may take you; to work hard; to be a good person; to show courage even in the face of impossible odds; and to always remember that it is not about the man but rather about the team.