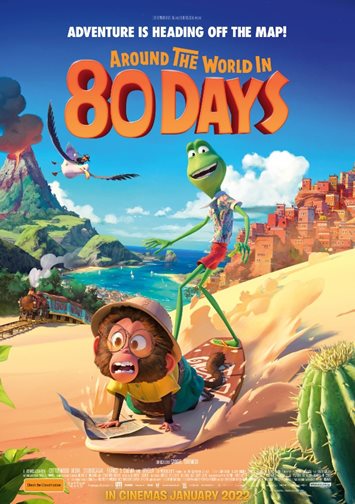 Passepartout (voice of Corey Doran), a book-loving marmoset, dreams of setting off to explore the world, far from his well-intentioned but overprotective mother (voice of Shoshana Sperling). When a sticky-fingered, adventure-loving frog, named Phileas (voice of Rob Tinker), surfs into his life, Passepartout can’t believe his luck. When Phileas bets a group of gambling shrimp that he can beat the current record and travel around the world in only 80 days, Passepartout is determined to join him on this epic journey. Phileas, however, has other plans and tries every trick in the book to leave the marmoset behind but Passepartout will not be dissuaded and, despite his mother’s dismay, sets off on the adventure of a lifetime. The unlikely pair has company in the form of a corrupt Officer of the law who is determined to capture Phileas, framing him for a crime he didn’t commit, and at the same time return Passepartout to his devastated and very angry mother. In addition to trying to beat a record that is far more difficult than they first believed it to be, Phileas and Passepartout must evade their pursuer while braving some of the most forbidding and dangerous terrain imaginable. When it seems that all is lost, a chance encounter with a Frog Princess opens their eyes and helps them see things from a new perspective, one that may help their dreams come true after all.

Separation from parents; Family dysfunction and breakdown; The thrill of chasing down someone or something; Bullying, gambling and unethical behaviours.

Around the World in 80 Days (2021) is an animated adventure, loosely based on Jules Verne’s classic tale of the same name. The film is a European production dubbed in English and, due to the animation, will largely appeal to younger audiences. However, some of the content, including crude humour, name calling, violence and unethical behaviours means that the film is largely inappropriate for its intended age group.

The main messages from this movie are to follow your dreams and to never give up, no matter how impossible or difficult the road may be.