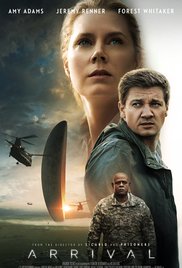 Not recommended under 12; parental guidance recommended 12 to 14 due to disturbing scenes and themes.

Without warning twelve 1500 foot high alien spacecraft appear out of thin air and position themselves randomly across the Earth’s surface. When one of the alien craft lands in the US state of Montana, Colonel Weber (Forest Whitaker) approaches Dr Louise Banks (Amy Adams), a world leading professor in languages, to find a way to communicate with the aliens and determine their purpose for coming to Earth.

Accompanying Dr. Banks is physicist Ian Donnelly (Jeremy Renner) whose job it is to determine the aliens’ technological capabilities, such as their ability to travel through the cosmos and defy gravity.

It takes several trips inside the alien craft before Louise Banks makes a breakthrough, communicating with the aliens through symbols and writing. She learns that the aliens have come to save humanity by giving them a gift. Unfortunately China’s General Shang (Tzi Ma) along with the leaders of a number of other countries misinterprets the aliens, believing them to have evil intent.  The misunderstanding leads to near disaster.

Aliens; xenophobia; death of a child

In addition to some of the above-mentioned scenes, children aged five to eight may be disturbed by:

Arrival is a different and thoughtful science fiction film which is likely to be enjoyed by older teens and adults.  The film focuses on resolving conflict and differences through communication, compassion and understanding, rather than aggression, dominance and war.