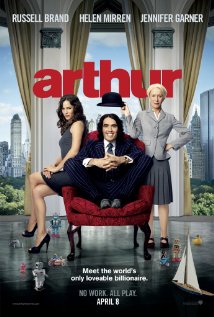 Arthur opens with multimillionaire playboy Arthur Bach (Russell Brand) and his chauffeur Bitterman (Luis Guzman) dressing up as Batman and Robin to attend a formal dinner party hosted by Arthur’s mother Vivienne (Geraldine James). An accident on the way results in Arthur being arrested and photos of the arrest appear on every iPhone at his mother’s party. In order to clean up her son’s image, Vivienne presents Arthur with an ultimatum: he must either marry Susan Johnson (Jennifer Garner), a ruthless businesswoman who will stop at nothing to marry Arthur, or be disinherited.

Unable to face the prospect of being poor, Arthur agrees to marry Susan, but then he meets unlicensed tour operator Naomi (Greta Gerwiz).  Naomi’s easy-going, quirky personality instantly captures Arthur’s heart and even Arthur’s long-suffering nanny, Hobson (Helen Mirren) warms to Naomi’s charms. Arthur is now torn between being rich, loveless and unhappy if he marries Susan, or poor and happy if he marries Naomi, and tries desperately to keep both relationships going.

Things change dramatically when Hobson becomes terminally ill and Arthur puts his own life on hold to care for her.

Arthur is a remake of a 1980’s comedy classic starring Dudley Moore which targets an adolescent and adult audience. Arthur is touching at times and has its funny moments, but does not live up to the 1980’s classic, making greater reliance on sexual innuendo for humour.

Values in this movie that parents may wish to reinforce with older children include self sacrifice and compassion as demonstrated by Hobson (and to some extent, also by Arthur).

Parents may wish to discuss how the film portrays Arthur’s alcohol abuse. Does it glamorise his alcoholism?