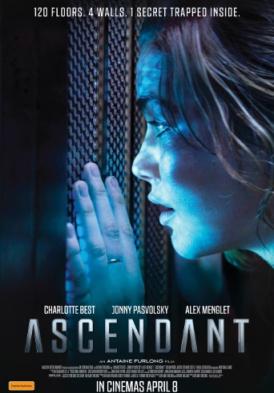 Not suitable under 14; parental guidance to 15 (violence, scary scenes, themes of torture)

Aria Wolf (Charlotte Best) awakens to find herself kidnapped and held hostage in a high-speed elevator in a 120-floor building in Shanghai. As she desperately tries to escape, Aria’s Russian captor, Yaroslav (Alex Menglet), forces her to watch live footage of her father (Jonny Pasvolsky) being brutally tortured for information about the mysterious ‘Engineer.’ As Aria is pushed to her physical and psychological limits, her younger self (Tahlia Sturzaker) slowly reveals her incredible powers over nature she has hidden from her older self. To save her father, herself, and the twin sister (Lily Stewart) she had been forced to forget, Aria must unlock her powers and defeat her captors.

Ascendant is an Australian film from first time Director, Antaine Furlong and is produced as both a claustrophobic thriller and a science fiction mystery. With frequent flashbacks, this film struggles to integrate its competing story lines into a cohesive narrative and may be more confusing than entertaining for viewers. The violence and themes of physical and psychological torture make this film unsuitable for children under 14 and parental guidance is recommended to 15. Parents and guardians should also note that this film was originally classified MA15+ prior to its release.