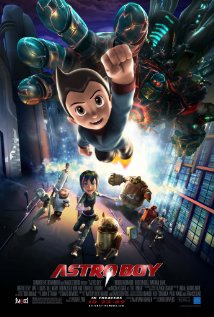 Not recommended under 5, PG to 10 due to violence, scary and disturbing scenes.

Metro City, a floating city suspended in the sky above the Earth is manned by an army of automated robots that tend to every whim of the City’s human inhabitants. The Earth below is a dumping ground for Metro City’s discarded robots. Toby (voice of Freddie Highmore) is a child prodigy and the son of Metro City’s head scientist Dr. Tenna (Nicolas Cage). When Toby follows his father to an experimental weapons test, the boy is unintentionally killed.

Unable to bear the loss of his son, Dr. Tenna creates an android replacement using his dead son’s DNA, programming the android with his son’s memories and powering it with a positive Blue Core energy. Initially the robot Toby believes he is the real Toby, but then learns the truth and discovers that he has super powers. Dr. Tenna then becomes disillusioned with him and decides to deactivate his creation. At this point the film’s chief villain President Stone (Donald Sutherland) enters the picture, demanding that Tenna hand over the Blue Core energy. Toby manages to escape the clutches of President Stone, but is attacked and by robot drones and falls to Earth.

On Earth, Toby is befriended by Cora (Kristen Bell) who is part of a gang of teenage orphans lead by a Fagan like character called Ham Egg (Nathan Lane). Not wanting to be found out to be a robot, Toby takes on the name Astro and maintains the pretence of being human. The gang spends their time rummaging through rubbish dumps for old robot parts which Ham Egg recycles to create gladiator-like robots to be used in “Games”, and after using his Blue Core energy to reactivate an old giant robot called Zog (Samuel L. Jackson), Astro wins the gang’s admiration and friendship. Ham Egg and the gang take Astro and Zog to the Games, but when Astro learns that the Games are a fight between robots to the death, he refuses to let Zog participate. In response, Ham Egg betrays Astro who is eventually captured by President Stone and taken back to Metro city where he faces a struggle for survival.

Grieving the loss of a son; discrimination and prejudice

Astro Boy is an animated action adventure which is tailored to a younger audience (8 -13 years) but contains some dark themes and some images that may scare younger children.

The film’s main messages include: