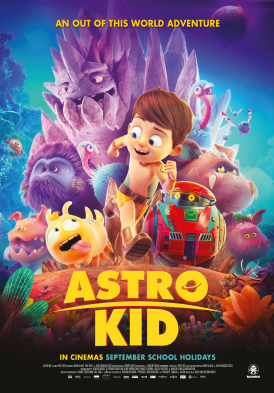 10 year-old Willy (voiced by Landen Beattie) is the son of two space explorers. Just before the family head back home to Earth, at the end of a mission, their spaceship is hit by asteroids. Willy and his parents get separated and escape in different rescue capsules, just before the spaceship explodes. Willy's capsule emergency-lands on an unknown planet. Gladly, the capsule is equipped with a smart robot assistant called Buck (Jason Anthony). While waiting for the arrival of a rescue team, Willy and Buck start exploring the unknown planet and encounter all sorts of alien creatures – some friendly, some not so friendly. And there is more trouble on the horizon, as Buck's battery level starts to run low. Gladly, Willy has made some local friends, including Flash – a friendly dog/caterpillar/pokemon-kinda creature – and he is determined to last out until he is reunited with his parents, and show them that he has what it takes to be a real space explorer.

Astro Kid is an animated space explorer adventure about a courageous little boy who must fend for himself on an alien planet until a rescue team arrives. The creators of this French animation production provide an entertaining, playful, family-friendly adventure, full of fanciful, creative details, positive role-models and messages. Not suitable for children under 5, and young viewers will benefit from parental guidance through some of the scary and suspenseful scenes, and to receive reassurance that Willy has the resilience and courage to manage on his own until help from Earth arrives.

The main messages from this movie are that in times of need you need to demonstrate resilience and courage, and that you achieve most with the help of friends.

This movie could also give parents the opportunity to discuss with their children the importance of adaptability: Willy manages to survive on the unknown planet because he pays attention to his new surroundings and learns how to deal with the given circumstances.