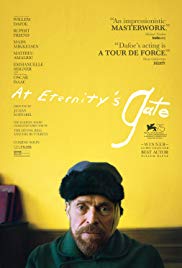 Not recommended under 13 and parental guidance to 15 (Disturbing themes and images, lacks interest for younger viewers).

At Eternity’s Gate is a biographical drama about the life of Vincent van Gogh. Vincent (Willem Dafoe) has moved to Paris (1886) to continue his love of painting. There he meets Paul Guaguin (Oscar Isaac) and the two become close friends who share their disdain of the current impressionist art forms. Two years later, Vincent moves to Arles where he paints some of his most famous work such as the Sunflowers and the Wheatfields. All of his life, Vincent suffers from mental illness, psychosis, and depression and is often delusional. He is disliked by the people of Arles and frequently attacked by the local villagers, including children. When Guaguin returns to Paris, Vincent suffers a breakdown and cuts off part of his ear to give to Guaguin.

Vincent spends a lot of his life in and out of mental asylums and he dies by a gunshot to the stomach. The film depicts this as him being shot by young boys, but there is speculation that it was suicide. Vincent was never successful during his lifetime and he lived a life of poverty, supported financially by his younger brother Theo (Rupert Friend) who traded in art.

Some children in this age group could be disturbed by the above-mentioned scenes.

At Eternity’s Gate is a biopic of the life of Vincent van Gogh. Unfortunately it is shot entirely with a hand-held camera to give it a sense of ‘cinéma vérité’, which also promotes motion sickness. Some of the photography and scenery is quite beautiful, however, and most of the dark aspects of the movie are spoken rather than shown. Dafoe is brilliant as the tortured artist and the movie will appeal to older teens and adults, but due to its content and the themes explored is not recommended for children under 13.