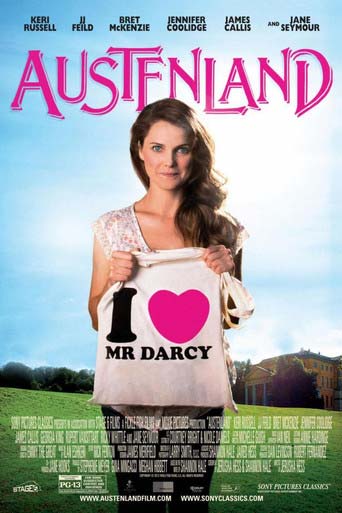 Austenland is a British romantic comedy about single thirty-something Jane Hayes (Keri Russell), an American woman obsessed with Colin Firth's Mr Darcy in the BBC adaptation of Jane Austen's Pride and Prejudice. Her idealisation of Mr Darcy has crippled her love life greatly – no real man can compare with the standards she has set. After her short-term boyfriend breaks up with her for that reason, Jane spends all her savings on a trip to an English Regency-style resort called 'Austenland' which offers an immersive Jane Austen experience. Guests must go by aliases, dress in period costume and go without all modern conveniences. There are even male actors posing as gentlemen and romance is guaranteed for each of the guests during their stay.

Jane soon finds herself torn between two of the men at the resort; the stable boy Martin (Bret McKenzie), who she presumes isn't an actor, and one of the gentlemen Mr Henry Nobley (JJ Feild). As time goes on, she finds herself falling for Henry. However, she equally doubts his intentions, believing it is merely part of the package 'romance'. Jane eventually discovers that Martin was scripted to fall for her, whereas Henry – who has only just begun working at the mansion – has genuine feelings for her. Jane then needs to decide whether to take a chance by trusting her instincts and giving Henry - a man who appears to be her ultimate fantasy - a real chance.

There is limited violence and some accidental harm in the film, including:

Nothing of concern apart from the violence described above.

Nothing of concern apart from the violence described above which may scare younger children in this age group.

There are some sexual references and innuendo in the film, including:

There is limited coarse language in the film, including:

Austenland is a heart-warming film about taking chances and letting go of preconceptions. Jane is initially bound by her infatuation with a television character and inability to see beyond what she believes she really wants. However, she soon discovers that if she wants to take control of her future and give herself a true chance at happiness, she needs to make herself vulnerable and open to new experiences. She wants something 'real', and progressively comes to realise that her fantasy can in fact be her current reality. The film is likely to lack interest for younger children and has some scenes that might scare children under 6.