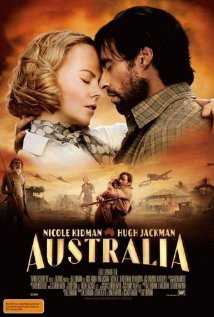 Not suitable under 12; parental guidance to 14 (violence, disturbing scenes)

The story takes place in 1939, set against the background of World War 11, and is partly told through the eyes of a young so-called ‘half-caste’ Aboriginal boy, Nullah (Brandon Walters).  At this time Aboriginal people and women weren’t allowed to be served in the front bar of a pub and Aboriginal children with white fathers were being taken from their mothers by bureaucrats who had decided that the Church could do a better job of bringing them up.
Nullah’s father, Neil Fletcher (David Wenham), a cunning and underhand man, is employed by Lord Ashley to manage his cattle station of Faraway Downs, in the Northern Territory. When word of the impending collapse of the station reaches Lady Sarah Ashley (Nicole Kidman) back in England, she decides to make the long journey to the distant land of Australia to discover what her husband is up to. Many surprises await her on her arrival, not the least of which is the death of her husband. She soon learns the truth about events at the station from young Nullah. Fletcher has been stealing her husband’s cattle and passing them on to the largest cattle station in the land, owned by Mr. Carney (Brian Brown).
Sarah also finds she has to place her trust in the drover (Hugh Jackman), whom she at first detests, to help her drive the cattle to Darwin. With the help of a small crew including Kipling Flynn (Jack Thompson), an old drunk, they drive the cattle through inhospitable country to try and beat Carney to the post. On the way, Sarah and the drover fall in love, but there is a long and difficult journey ahead of them.

Children in this age group may also be disturbed by some of the above-mentioned scenes, particularly those in which Nullah is threatened and in danger and some of the war scenes.

Some children in this age group may also find some of the above scenes upsetting.

Australia is an epic romantic adventure story. It contains a stellar cast of Australian actors and is set in some beautiful and dramatic landscapes.
The main messages from this movie are that we should correct the errors of the past and promote racial harmony.
Values in this movie that parents may wish to reinforce with their children include: