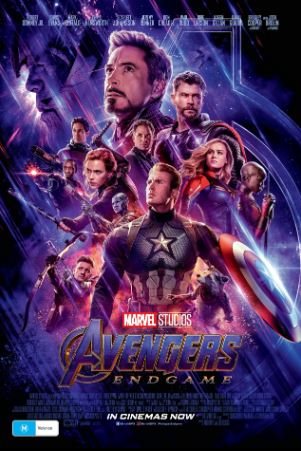 Avengers: Endgame follows on directly from last year's film Avengers: Infinity War. Following the catastrophic and devastating events of Avengers: Infinity War, in which Thanos (Josh Brolin) ‘disappeared’ half of life in the universe; the Avengers are seeking out Thanos and trying to find a way to return the universe to the way it was.  After failing for five years to fix what happened, an old ally makes a surprise visit to the remaining Avengers, concocting a crazy, time-bending plan to prevent their Archnemesis from getting the infinity stones in the first place.

Avengers: Endgame is the final instalment of the Marvel Avengers film series. While it is long at 181 minutes, the film is engaging and entertaining from start to finish, with strong performances from all involved.  The film is both funny and emotionally poignant, with the stories of many long-loved characters coming to an end.  Teenagers aged 13 and above are likely to really enjoy this film, however parental guidance is recommended due to the frequency of violence and destruction. Children under 12 will likely be quite distressed by the numerous and often violent deaths within the film, so it is not recommended for this age group.