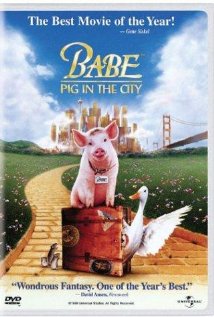 Not recommended under 5, PG to 10 (Disturbing scenes)

Babe (voice of Christine Cavanaugh), the runt of a litter, is taken from his mother and won by Farmer Hoggett (James Cromwell) at a local fair. Hogget takes Babe home to the barn, where he is adopted by Fly (voice of Miriam Margoyles) a caring sheepdog who raises Babe as her own. Babe befriends many of the animals in the barn including Ferdinand the duck (voice of Danny Mann) who is forever trying to save himself from the dinner table and consequently gets Babe into trouble on many occasions.

Babe is very keen to learn how to herd sheep and often goes out with Fly and Rex (voice of Hugo Weaving) to learn how to control the sheep.. He discovers that talking to the sheep has better results than biting at their heels. Babe makes such an impression on Farmer Hoggett that he decides to enter him into the local sheepdog trials, much to the dismay of his wife and all of the judges. Babe however, aided by Rex and Fly, is smarter than the average pig and manages to turn the scorn and laughter of the audience and judges into amazement.

the breeding of farm animals to be killed for food; the reality of farm life; predatory animal behaviour

In addition to the above mentioned violent scenes, there are some scenes in this movie that could scare or disturb younger children in this age group, including the following:

Babe is a delightful family film which combines the use of real animals with computer generated animation with excellent results.

The main messages from this movie are that you can achieve your desires if you really persevere and overcome prejudices, and that looks can be deceptive.

This movie could also give parents the opportunity to discuss with their children the fact that animals are bred for people to eat and for that reason some people prefer to be vegetarian.