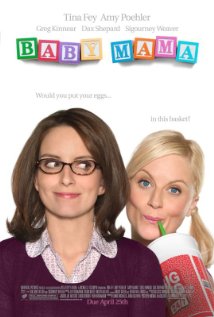 Kate Holbrook (Tina Fey) is a highly successful businesswoman working for Round Earth Organic Foods. However at 37, she is longing for a baby and having difficulty getting pregnant. She tries IVF, which fails, and her doctor informs her that her T-shaped uterus makes it highly unlikely that she will ever fall pregnant. At the suggestion of her sister Caroline (Maura Tierney), she decides to try surrogacy.

Kate is matched with prospective surrogate mother Angie, (Amy Poehler) who comes from a completely different social background. Kate is self-disciplined, in control and highly organised, whereas good-natured Angie, who is married to drop-out Carl (Dax Shepard), is chaotic, scheming and fun-loving. Angie moves out of home with Carl and into Kate’s house with hilarious results. Eventually the two learn to compromise and both learn something from the other.

In addition to the above-mentioned violent scenes, there are some scenes in this movie that could scare or disturb children under five, including the following:
Angie, giving birth, screams in pain.

Younger children in this age group may also be disturbed by Angie’s screams while in labour.

Baby Mama is a funny movie about a serious subject. The characters are all somewhat stereotyped, such as the successful businesswoman, the ‘white-trash’ female and the pony-tailed, tree-hugging boss of Round Earth Foods.
The main messages from this movie are that life doesn’t always go as planned and not to force your own values onto others.
Values in this movie that parents may wish to reinforce with their children include not being judgemental

This movie could also give parents the opportunity to discuss with their children issues such as IVF, surrogacy and single parenting.