Back of the Net 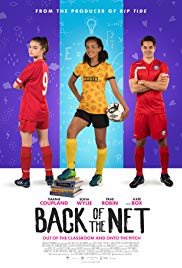 Not recommended for children under 5 (lack of interest). Parental guidance to age 8 (bullying, romantic themes).

Cory (Sofia Wylie) is an ultra-brainy American school girl who is preparing to go on a three-month scientific boat trip out at sea with the Harold Science Academy in Sydney.  However, she accidentally boards the wrong the bus and finds herself on the way to the Harold Soccer Academy instead! Against her nature, she is forced to navigate the complex world of friendship, soccer, and boys; all without getting in the way of the Academy’s queen bee, Edie (Tiarnie Coupland).  When Edie’s best friend Oliver (Trae Robin) takes a shine to Cory, Edie makes it her mission to bring the new girl down.  With Edie’s wrath and the future of the practice soccer team looming above them, Cory and her friends Janessa (Gemma Chuan-Tran), Adelle (Yasmin Honeychurch), and Charlotte (Ashleigh Ross), must work together to beat Edie at her own game, and prove they have what it takes to remain at the Academy.

Back of the Net is a sweet Australian children’s film, that shows anyone can succeed if they work together.  There are great performances by the younger cast; some comic relief from the girls’ soccer coach; and strong moral messages of friendship, teamwork, and acceptance. This film will likely entertain children between 10 and 13 but much younger or much older children are likely to find that this film lacks interest.