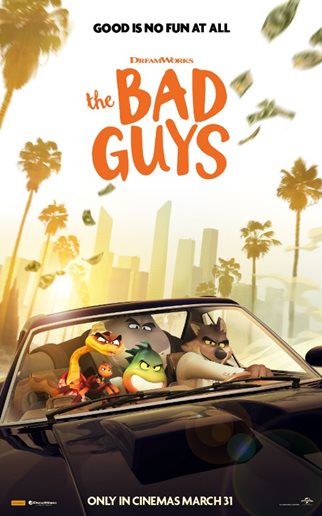 Not suitable under 5; parental guidance to 9 (violence, scary scene, themes)

Wolves have always been given a bad rap. They are the villains in every story and Wolf (voice of Sam Rockwell) is seen as no exception. Why be good when everyone always sees you as bad? Together with his friends: Snake (voice of Marc Maron), Shark (voice of Craig Robinson), Piranha (voice of Anthony Ramos), and Miss Tarantula (voice of Awkwafina) they make a highly skilled and successful team responsible for countless robberies and notorious thefts. Believing that they are invincible and wanting to show the new Mayor Diane Foxington (voice of Zazie Beetz) that they are not insecure and unhappy like she describes them in a news broadcast, they set about attempting to steal a highly coveted golden trophy that has never been stolen before. Caught in the act and unable to escape, the friends are offered the chance to take part in a social experiment run by the highly honoured, good Samaritan, Professor Marmalade (voice of Richard Ayoade). If he is able to show that 'The Bad Guys' have learned to become good, then he will get the golden prize and they will get their freedom. For 'The Bad Guys', changing who they are certainly seems thankless and impossible but they soon learn that there is far more at stake than changing people’s perception of them or even their chance of freedom.

The Bad Guys is an animated adventure with a fast paced, predictable plot and a positive message about the power of second chances and how everyone has something good inside them. The film will appeal to kids of all ages and can be enjoyed as a family film with all but the youngest of viewers.

The main messages from this movie are that change is possible; that stereotypes don’t have to stick; and that being good brings greater happiness and riches than stealing ever could.