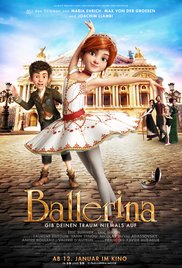 Ballerina tells the story of a feisty 11-year-old orphan from Brittany called Félicie (voice of Elle Fanning). Félicie, who dreams of becoming a dancer, escapes from the orphanage with the help of her best friend Victor (voice of Dane DeHaan) who wants to be a great inventor. Together the friends set off for Paris to chase their dreams.

In Paris, Félicie befriends Odette (Voice of Carly-Rae Jepsen) who is the cleaner and caretaker of the grand Opera-Ballet and, through a twist of fate, manages to bluff her way into taking ballet classes. The girls in the class are auditioning for a part in the Nutcracker and each day one girl is eliminated from the group. Félicie must pour all her strength and passion for dance into making sure that she wins the part. She comes up against many challenges and has a number of set-backs to overcome.

Following your dreams and working hard towards a goal; determination and bravery in the face of hardship; being an orphan; competition

There is some animated violence in this movie including:

Children in this age group may also find the above scenes disturbing and parental guidance is recommended.

Félicie and Victor spend some time in what appears to be a bar or a pub. They are not seen drinking but just dancing to the music.

There is some mild insults and toilet humour in this movie, including:

Ballerina is an entertaining animated dance movie about following your dreams and working hard. The plot is predictable but enjoyable and will appeal to pre-teens, particularly those who are interested in ballet and dancing. There are some scary scenes and characters which might disturb very young viewers so the film is not recommended for children under five with parental guidance recommended for five to seven year-olds.

Parents also may wish to discuss: