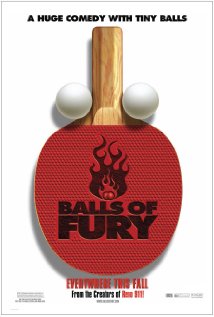 The film commences with twelve year old Randy Daytona, a ping-pong prodigy competing in the 1988 Seoul Olympics against a rather obnoxious adult East German competitor, Karl Wolfschtagg (Thomas Lennon). Just prior to the commencement of the match, Randy learns that his father Sgt. Pete Daytona (Robert Patrick) has placed a large bet on the game’s outcome with a Chinese Triad crime lord called Feng (Christopher Walken), who happens to be a ping-pong fanatic. Unfortunately, Randy loses the match when he runs into a guard barrier and knocks himself unconscious, and as a result, Randy’s father is murdered by the Triad.

Nineteen years later, an overweight Randy (Dan Fogler) is earning his living performing ping-pong tricks in a third rate restaurant when he is paid a visit by FBI agent Ernie Rodriguez (George Lopez). The FBI wants Randy to infiltrate Feng’s crime organisation via a prestigious underworld ping-pong tournament organised by Feng. However, Randy’s game is not what it use to be, and to bring his game up to scratch the FBI introduce Randy to Master Wong (James Hong), a blind ping-pong master, and his niece Maggie (Maggie Q), a ping-pong master in her own right.

After beating a local champion named “The Dragon”, a twelve year old school girl, Randy receives an invite to compete in Mr. Feng’s grand tournament. Randy, Wong and FBI agent Rodriguez board a bus and end up at Feng’s secret base somewhere in Central America where Randy learns that the tournament involves games of sudden-death where the loser gets a poison dart in the neck. Randy manages to survive all his matches and move up the ranks to finally face his old rival Karl Wolfschtagg.

Children in this age group are likely to be disturbed by many of the violent scenes described above and the threatening and menacing characters.

Children in this age group may also be disturbed by a number of the violent scenes and characters described.

Balls of Fury contained numerous overt and covert sexual references and innuendos throughout. Examples include:

The film Balls of Fury contains some sensuality and suggestive heterosexual and homosexual activity and occasional toilet-like humour. Examples include:

The film’s main messages relate to finishing what you started, finding your strengths within yourself, and making sacrifices for those you love.