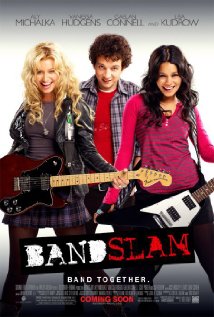 Will Burton (Gaelan Connell) doesn’t fit in at school where he is bullied and taunted so when his mom Karen (Lisa Kudrow) tells him they are moving to New Jersey and a fresh start at a new school Will couldn’t be more ecstatic.

Will writes on a daily basis to his rock hero David Bowie, who never replies to his letters, but when it comes to understanding rock music Will is a genius. At his new school Will is befriended by ex-cheerleader Charlotte Banks (Alyson Michalka), who puts Will’s genius to good use. Charlotte used to be a member of the popular local rock band Glory Dogs, whose lead singer Ben Wheatly (Scott Porter) was Charlotte’s boyfriend, but she has now formed her own band. Charlotte is so impressed with Will that she make him the band’s manager, hoping that he can raise the band to new heights so that they can compete in the Tri –State Bandslam competition.

Will also makes friends with an unusual girl called Sa5m (Vanessa Hudgens) - the “5” in her name is silent – and, assisted by Charlotte, this friendship blossoms into a romance.  Will throws himself into getting Charlotte’s band ready for competition but the road to Bandslam is not an easy one.

In addition to the above-mentioned violent scenes, there are some scenes in this movie that could scare or disturb children aged under five, including the following:

Children in this age group may also be disturbed by the story of Will’s father and its effect on Will’s life.

There are occasional low-level sexual references in this movie, including:

There is some occasional mild coarse language and putdowns in this movie. Examples include:

Bandslam, a Disney release, is a teenage high school romance that is likely to appeal particularly to teenage girls but also entertain their parents.  The storyline, soundtrack and quality of the acting are good and the film’s lead characters are well developed.