Barbie in 'The Pink Shoes' 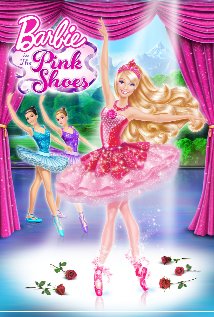 This is the latest animation featuring the doll character Barbie – this time in the role of Kristyn Farraday, an aspiring ballerina.

Kristyn (voice of Kelly Sheridan) is a hard-working young ballet dancer but the lead roles always go to Tara (Ali Liebert). While Kristyn is rehearsing for the showcase performance, Madame Natasha (Tabitha St. Germaine) berates her for not following instructions perfectly, which upsets Kristyn and makes her feel like a failure. Feeling sad and needing new ballet shoes, Kristyn visits the wardrobe mistress, Madame Katarina (Lori Triolo) who gives her a pair of bright pink ballet shoes. When Kristyn puts on the new shoes they transport her and her friend Hailey (Katie Crown) the seamstress, to a fantasy land of classical ballet sets.

Kristyn finds herself dancing the parts of both Giselle and Odette from Swan Lake and is pursued by Albrecht and Prince Siegfried who both want to marry her. She is also pursued by the wicked Snow Queen (Tabitha St. Germaine) and the evil Rothbart (Bill Mondy).

When Kristyn and Hailey finally return to reality, Kristyn has learnt the importance of following your own heart, particularly when it comes to dancing.

There is some mild violence and accidental harm in this movie including:

The following products are displayed in or associated with  this movie:

Barbie in ‘The Pink Shoes’ is an animated fantasy involving the Barbie character playing the role of Kristyn, a young ballerina. It touches on some classical ballets including Giselle, Swan Lake and the Snow Queen. There are some scary scenes and characters which might worry under sevens, but these are handled fairly lightly, making it suitable for most children with some guidance. It is likely to particularly appeal to girls who are interested in ballet or in Barbie as a character.

The main messages from this movie are that you should follow your heart and that good wins over evil.

This movie could also give parents the opportunity to discuss with their children the pressures of being and looking perfect, particularly for young girls.