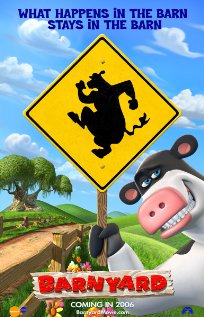 Barnyard: The Original Party Animal is set in a barnyard where the animals pretend to be dumb animals when humans are around but once the humans are gone they stand up, chat, throw parties and generally have fun. The group is led by a bull called Ben (voiced by Sam Elliott). Ben is a very responsible leader. He has meetings, he organises the animals, makes sure everyone is properly protected and also makes sure that no humans know they can do what they do.

Ben has a son called Otis (Kevin James) who is the exact opposite. Otis spends his time, partying, playing and teasing humans. He insists that he isn’t like his dad, he doesn’t want any responsibility, he simply wants to party. Ben tries to lecture him but in the end gives up and shoulders the responsibility by himself.

One of the barnyard rules is ‘stay within the fence perimeter’. It is coyote season and many of the animals need protecting. One night, Ben is on guard and Otis is supposed to come and help him on his shift. Otis is singing at the latest Barnyard party and persuades his dad that he isn’t needed. While the party is happening, the coyotes sneak in and try to take some of the hens. Ben gets there quickly to protect them; however the coyotes outnumber Ben and although he saves the hens he is fatally injured. Otis now needs to make a decision about whether he can lead the Barnyard or not.

Animals in danger; death of a parent

Children under five are likely to be concerned by the violent scenes above, particularly the attacks on the hens, and the attack on Otis.

In addition to the above-mentioned scenes, children aged five to eight could also be disturbed by the scenes of Ben’s death, his burial, and by Otis’ sadness.

Some children in this age group could still be concerned by Ben’s death.

The animals drink at the party but it appears to be milk rather than anything stronger.