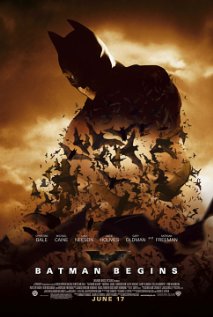 Not recommended under 15s (Viol. Horror)

Eight year old Bruce Wayne, while playing on grounds of Wayne Manor, falls through a disused well and is attacked by a large flock of bats, as a result being left with a fear of bats. A number of years later, Bruce (Christian Bale) is an inmate in a prison somewhere in Asia. The mysterious Henri Ducard (Liam Neeson) aids Bruce’s release from prison, and trains Bruce in the ways of the League of Shadows, an age-old secret society that fights corruption and evil. At the end of his training, Bruce has a falling out with Ducard and returns home to Gotham City.

Once home, Bruce finds that crime boss Carmine Falcone (Tom Wilkinson) is in control of Gotham City, which is now full of crime and corruption. To fight the criminal element of Gotham, and with the support of Alfred (Michael Caine), and Wayne Enterprises’ Applied Science division run by Lucius Fox (Morgan Freeman), Bruce acquires all the equipment necessary to transform into his Batman persona, a terrifying batlike creature able to strike out of shadows and vanish without a trace.

Batman learns that there is an even greater evil at large than Falcone. Dr. Jonathan Crane (Cillian Murphy) uses a fear-inducing psychotropic drug to make his victims see him as a terrifying Scarecrow, resulting in permanent brain damage and psychotic behaviour. Crane/  The Scarecrow is backed by Ducard and the League of Shadows, who have been supplying Crane with the fear inducing drug. Batman and his ally Detective Gordon (Gary Oldman) join forces to defend the population of Gotham City against their evil plans.

Batman Begins contains many scenes of brutal physical and psychological violence, and fear is used as a major weapon. Violent scenes include:

The violence presented in Batman Begins is more disturbing than any other Batman film as the violence is presented a realistic manner rather than comic book style. Both good and evil characters use physical and psychological violence to intimidate and control those who oppose them. Batman’s use of vigilante violence was glamourised, and portrayed as successful, justifiable and acceptable.

Most of the fight scenes in the movie are represented as a whirl of movement leaving the viewer with an impression of what happens rather than actually seeing it. The fight scenes still give the appearance of being very violent and brutal, and Batman’s victims demonstrate a genuine fear of Batman’s wrath.

In addition to the above-mentioned scenes, there are many scenes that could scare or disturb young children. Two scenes of Bruce as a young boy could be particularly distressing:

Visual images that could disturb children under the age of eight include:

Other scenes of concern are:

The violence and violent visual images in Batman Begins are presented in a very realistic manner and setting, and are still capable of scaring or disturbing children aged eight to fifteen.

Some older adolescents could still be disturbed by the horror-like images presented in Batman Begins. It is recommended that parents consider the film’s contents and carefully assess their own teenager’s ability to cope with it.

There are no explicit sexual references, although there is some mild sexual innuendo, including the implication that Bruce Wayne is a playboy, accompanied by beautiful, provocatively dressed playgirls.

The movie contains some use of substances, including:

Mild, and occasional use of coarse language, including what the hell and bloody.

Batman Begins is about the struggle of a sole vigilante against injustice and corruption. Batman struggles with his ideals, his own anger and uses fear to fight his own fear.

Parents of teenagers who view this film may wish to discuss the portrayal of violence as an acceptable method to fight injustice and corruption, and what the real life consequences can be of vigilante justice.