Batman: Return of the Caped Crusaders 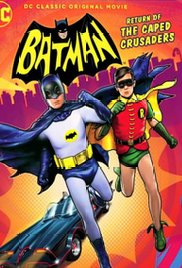 Not recommended under 8, parental guidance 8-10 due to violent and scary scenes.

Batman: Return of the Caped Crusaders is an animated superhero film based on the 1960s Batman TV series. The movie follows crime-fighters Batman and Robin as they battle against a group of nefarious villains in an effort to protect Gotham city. The Joker, Penguin, Riddler and Catwoman make their presence known on live television one day, and the Police Commissioner requests that Batman and Robin bring them to justice.

The film follows the heroes and villains as they play cat-and-mouse, leave clues and follow each other’s trails. In the midst of the chaos, Catwoman attempts to poison Batman with a potion that will bring out an evil nature within him. Although it initially does not appear to have any effect, Batman gradually begins to seek out power, control and supremacy over Gotham, appointing replicas of himself to every significant public position. Robin eventually teams up with Catwoman in an attempt to bring Batman back from the dark side, so that they can take on the other supervillains and stop them before it’s too late.

Crime and justice; morality; good versus evil; romance and friendship

There is fairly frequent animated violence within the film, including:

There are mild sexual references within the film, including:

There are mild references to substances, including:

There is very mild coarse language, including:

Batman: Return of the Caped Crusaders is a return to the comic version of Batman seen in the 1960s and a contrast to the very dark superhero movies of more recent times.  The film explores the nature of good and evil, and highlights the importance of democracy, law, and following the rules that keep society functioning. The story emphasises the importance of taking ‘bold risks’ for the greater good of society and the strength of friendship in overcoming challenging obstacles.

Although not as dark and scary as recent versions of the Batman story, this film still has violent and scary scenes which could disturb young children, so is not recommended for children under 8. Parental guidance is recommended for 8 to 10 year olds.